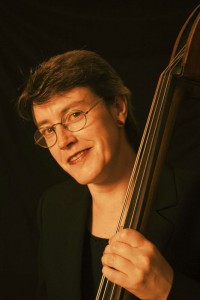 Born in Norwich, England 1962.
Studied in London at the Guildhall School of Music and Drama 1980-83
and at the Academy For World Music at Rotterdam Conservatory 2003-05

Worked as freelancer with many of the professional orchestras in the UK, and in a wide range of musical styles and ensembles including jazz, klezmer, eastern european folk music and New Age acoustic rock. Discovered Tango around 1997 and went on to form the UK’s first professional Tango band, “Tango Siempre” in 1998. Performed extensively with this group at tango venues, festivals, theatres and arts centres before moving to Holland to further her studies in the tango genre at Rotterdam Conservatory in 2003.

Since moving to NL has performed with the orchestra of the tango department at Rotterdam Conservatory, Orquesta Típica OTRA 2003-05, Quinteto Zárate since 2005, has been a performer/musician in the theatre productions of noted Dutch Actor and Theatre Director Frank Groothoff 2005-07. Since 2004 has been a member of Cuarteto Rotterdam and also a member of Orquesta Típica Guardia Cadenera.